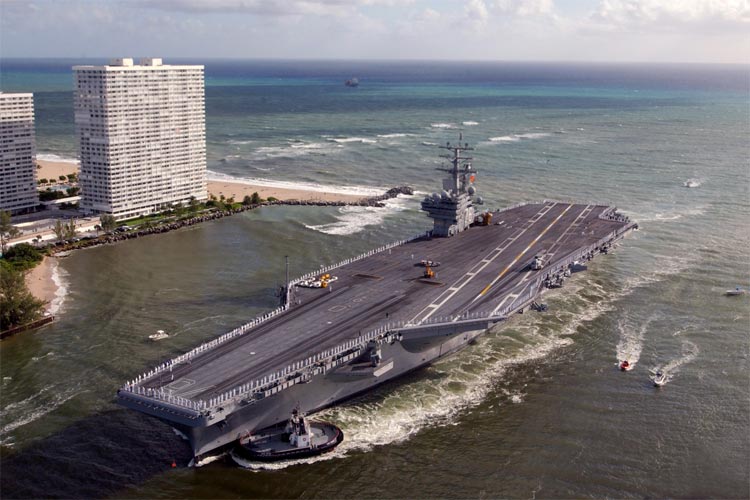 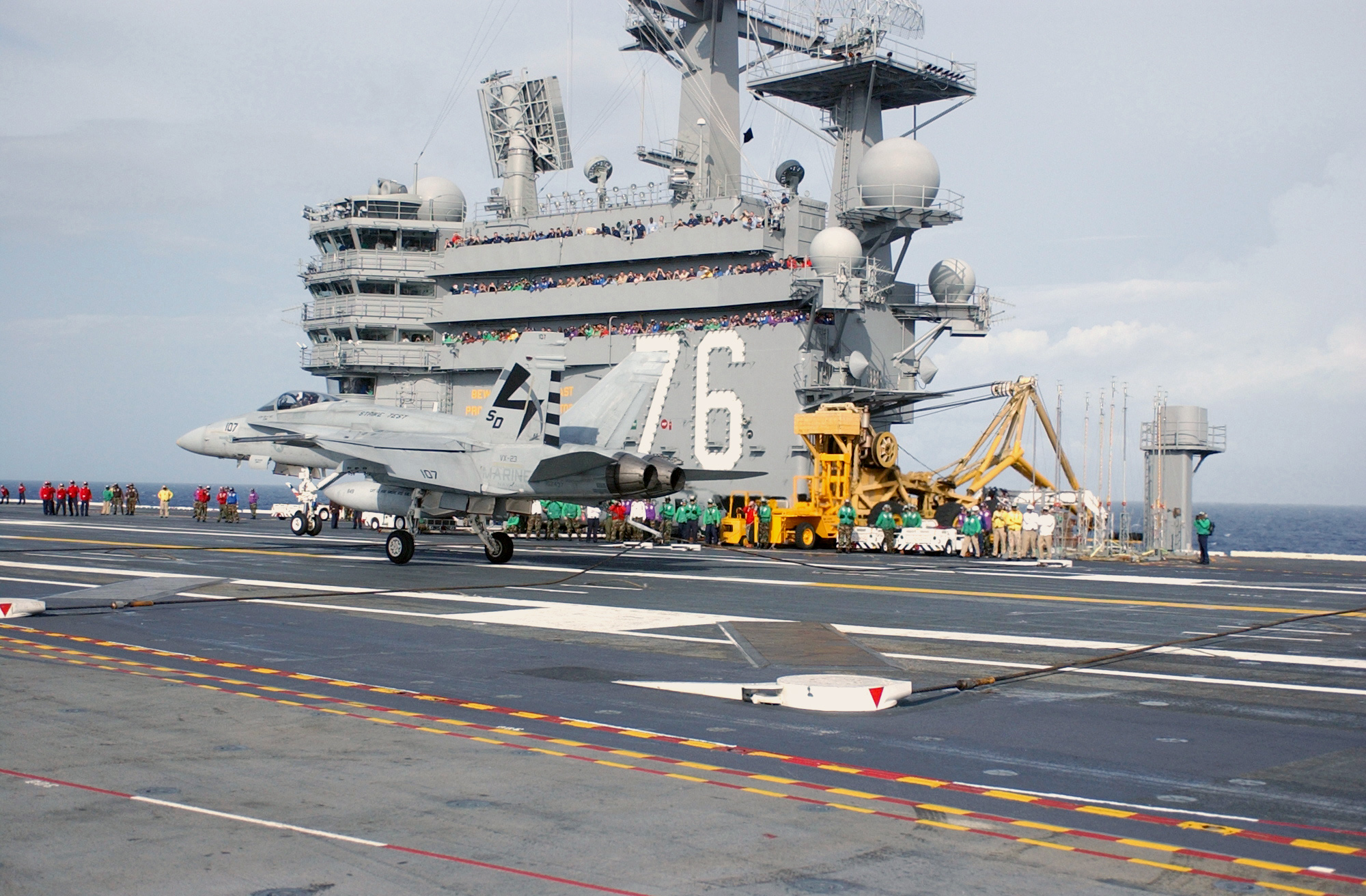 In January 2014, the U.S. Navy announced that starting with October 2015 the USS Ronald Reagan will be the one to replace the USS George Washington CVN-73 as the flagship of Carrier Strike Group Five. This is the only forward-based carrier strike group and its home-ported at Yokosuka, Japan.


The USS Ronald Reagan's seal was designed by the plankowner crew with the help of the staff members at the Ronald Reagan Presidential Library foundation.

The colors of the seal: red, white and blue reflect the American flag. The seal's red border rings defines the White House china designed for the President and First Lady during their White House years.

"Peace Through Strength" was one of the recurring themes of Ronald Reagan's presidency. He spoke of the significance of this in his Radio Address to the Nation on 24 September 1988 when he stated: "One thing is certain. if we're to continue to advance world peace and human freedom, America must remain strong. if we have learned anything these last eight years, it's that peace through strength works."

The seal also features an aircraft carrier that is cutting a powerful swath through the sea and it is positioned by the west coast. This represents his two terms as Governor of California and also the ship's homeport in the Pacific Fleet.
There are also three aircraft that symbolize the three major military operations during Ronald Reagan's presidency: Operation Urgent Fury (Grenada - 1983), Operation El Dorado Canyon (Libya - 1986) and Operation Praying Mantis (Iran - 1988). During all these military operations aircraft carriers played an important role.


Northrop Grumman Newport News and Dry Dock Company in Newport News won the contract for building the USS Ronald Reagan on 8 December 1994. The keel of the aircraft carrier was laid down only for years later on 12 February 1998. The construction took several years and had an overall cost of $4.5 billion - a significant increase from the initial budget. The cost increase was caused by the redesign of several key components of the ship as for example the ship island.

3 years later on 4 March 2001 the USS Ronald Reagan was christened by Reagan's wife Nancy at Newport News Shipbuilding. One year later on 30 October 2002 the crew of the Reagan moved onboard and the commissioning of the ship took place on 12 July 2003 at Naval Station Norfolk. The first captain of the aircraft carrier was John William Goodwin and the ship undertake her maiden voyage on 21 July 2003. Only eleven months later former us president Ronald Reagan died. Upon Nancy Reagan's request the ship's commanding officer at that time Captain James Symonds presented the flag that draped the former president's casket to Mrs. Reagan. The flag was the same that had flown over Capitol Hill on 20 January 1981 when president Ronald Reagan was inaugurated. At a later date, Captain Symonds also presented Mrs. Reagan the flag that had been flying over USS Ronald Reagan when the former president died.


The USS Ronald Reagan was the first nuclear-powered warship that was named in honor of a former president still alive. Another interesting fact is that Ronald Reagan was not associated in any way with the United States Navy, apart from this role as Commander-in-Chief while he was president of the United States (however one of his key initiatives while in office was the 600-ship Navy program).


The USS Ronald Reagan completed her five-month post-shakedown availability (PSA) and received her second flight deck certification on 8 May 2004. This certification includes all flight operations, including aircraft launch and recovery, safety, crash and salvage, fuel certifications, and training.
This event was followed by the transfer of the aircraft carrier from Naval Station Norfolk, Virginia to her new homeport of Naval Air Station North Island, San Diego. The transit journey took the ship around Cape Horn, South America having on board 25% of Carrier Air Wing Eleven, normally assigned to USS Nimitz.
The squadrons which made the transit were VFA-14 and VFA-41 flying the F/A-18E/F Super Hornet, VAW-117 flying the E-2C Hawkeye 2000, HS-6 flying the SH-60F Seahawk and VRC-30 flying the C-2A Greyhound. The USS Ronald Reagan then transited the Strait of Magellan on 21 June 2004 and made several port visits to Rio de Janeiro, Brazil, Valparaiso, Chile, and Callao, Peru before arriving in San Diego on 23 July 2004.

On 1 October 2004 the USS Ronald Reagan was assigned to Carrier Strike Group Fifteen.


The USS Ronald Reagen began her maiden deployment on 4 January 2006. This involved conducting naval operations in support of Operation Iraqi Freedom and Operation Enduring Freedom. Also the ship conducted maritime security operation in the Persian Gulf. During this deployment, on the 28 January 2006, an F/A-18 Hornet strike fighter crashed into the ship's flight deck while attempting a night landing. The incident occurred 200 km (120 mi) southeast of Brisbane, Queensland. The pilot ejected safely but the aircraft was lost as it struck the ramp, caught fire and skidded overboard. The USS Ronald Reagan entered the Persian Gulf on 22 February 2006 and returned from her first deployment on 6 July 2006.


In early 2007 the USS Ronald Reagan together with the Reagan Carrier Strike Group (CSG) was ordered to depart North Island, Coronado in San Diego on an unscheduled surge deployment. The group departed on 27 January 2007 to the Western Pacific to replace the USS Kitty Hawk CV-63 as the Navy's sole forward deployed carrier. USS Kitty Hawk was under maintenance in Japan at that time. A few months later on 20 April 2007 the USS Ronald Reagan CSG returned to Coronado. This "surge deployment" was part of the US Navy's Fleet Response Plan. This plan provided the United States with the ability to respond to any global commitment quickly with flexible and sustainable forces.

In January 2007 the Ronald Reagan received the 2006 Commander, Naval Air Forces Pacific Carrier Battle Efficiency "E" award for the West Coast. This was the first time that a carrier has receved the Battle "E" award.

On 15 December 2007 the USS Ronald Reagan deployed an SH-60 helicopter in response to a distress call from a cruise ship of the coast of Baja California. The helicopter airlifted an Illinois teenager whose appendix has ruptured while on a Mexican cruise and transported her to the carrier where an emergency appendectomy was performed by the USS Ronald Reagan's surgeon. The teenage girl made a full recovery following the incident. source


On 10 January 2012 Reaganâ€Š'â€‹s official home port was changed to Bremerton, Washington. The ship stayed just over a year there returning to her home port of San Diego on 21 March 2013

On 14 January 2014, the US Navy announced that the Ronald Reagan would replace her sister ship George Washington as the Seventh Fleet forward deployed carrier at Yokosuka, Japan in 2015.

The USS Ronald Reagan arrived in Yokosuka, Japan on 1 October 2015. The aircraft carrier will replace her sister ship the USS George Washington CVN-73 as flagship of Carrier Strike Group Five and the US Navy's only forward deployed carrier.

On 4 June 2016 the USS Ronald Reagan departed its Yokosuka base for a deployment in the South China Sea, just before a decision by an international tribunal regarding a conflict between China and the Philippines. The deployment ended after 53 days and the ship conducted a Board of Inspection Survey (INSURV). The inspections carried out during this survey are designed to ensure that the Ronald Reagan lasts for its full 50-year lifespan.
In August 2016 the aircraft carrier left port temporarily due to Typhoon Lionrock. Upon its return it completed the survey and then participated in Exercise Valiant Shield 2016. In the last quarter of 2016 the Ronald Reagan made a port call at Guam and participated in the exercise Invincible Spirit together with the South Korean forces in the Sea of Japan and in the Yellow Sea.


During her deployments the USS Ronald Reagan was involved or was the scene of several accidents: