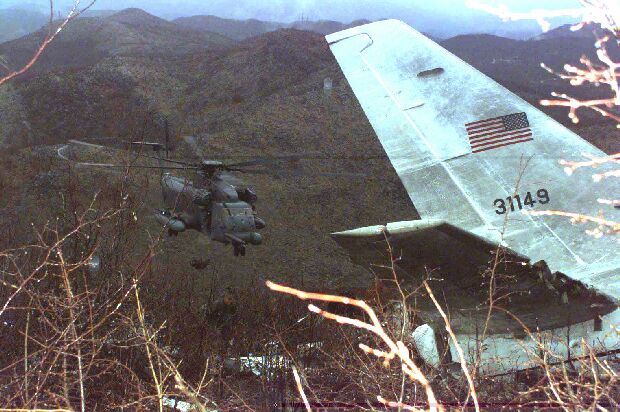 On 3 April 1996 special trade mission flight IFO-21 a USAF Boeing CT-43A crashed on approach to Dubrovnik Airport during an official trade mission killing all 35 people on board. The Boeing CT-43A was carrying the United States Secretary of Commerce Ron Brown and some other notable people like The New York Times Frankfurt Bureay chief Nathaniel C. Nash. The plane crashed into a mountainside while attempting an instrument approach. Initially there was one survivor Air Force Technical Sergeant Shelly Kelly who received only minor injuries however she died three hours after the crash due to an injury sustained in the ambulance.

The aircraft involved in the crash was operated by the 86th Airlift Wing, based at Ramstein Air Base in Germany. Due to the fact that this was a modified 737 for military use it wasn't equipped with a flight data recorder or a cockpit voice recorder.


The Boeing CT-43A that was used for this flight was formerly a T-43A navigator training aircraft, converted for distinguished visitor travel.


There were 30 passengers and 5 crew members on board at the moment of the accident. Among the passengers were United States Secretary of Commerce Ron Brown, The New York Times Frankfurt Bureay chief Nathaniel C. Nash.
From all 35 people on board only one initially survived the crash - Air Force Technical Sergeant Shelly Kelly who received only minor injuries. She died however three hours after the crash due to an injury sustained in the ambulance.


The official report by an Air Force accident investigation board report noted several reasons that led the Boeing CT-43A, callsign IFO-21 (short for Implementation Force), to crash. The most important among the findings was a "failure of command, aircrew error and an improperly designed instrument approach procedure". It is noteworthy that the weather was not considered a substantial contributing factor in the crash.


The head of navigation on Cilipi Airport, Niko Jerkuic, was found dead (with a bullet wound in his chest) three days after the accident .


The location of the crash site is identified by a large (10 metre tall) stainless steel cross on Strazisce peak. Hikers can reach the peak via the Ronald Brown path which is named in commemoration of the U.S. Secretary of Commerce who died in the crash.

A memorial room has been installed in the Ronald Brown memorial house in the old city of Dubrovnik. It features portraits of the crash victims as well as a guest book.

The crash of this special trade mission flight is featured in episode 10 of the 4th season of the air-crash investigation television show Air Crash Investigations (called Mayday in the US), entitled Fog of War.