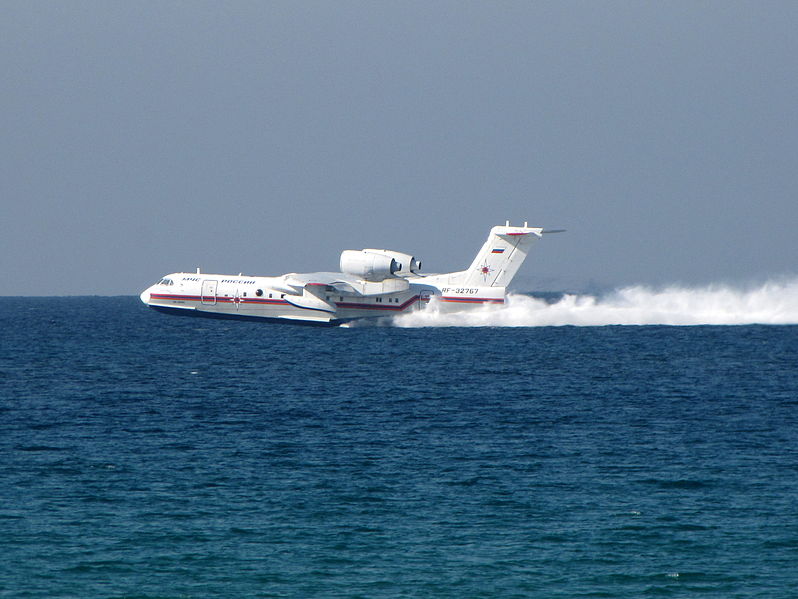 Beriev Be-200 of the Russian Ministry of Emergency Situations. In operation in 2010 Mount Carmel fire in Israel 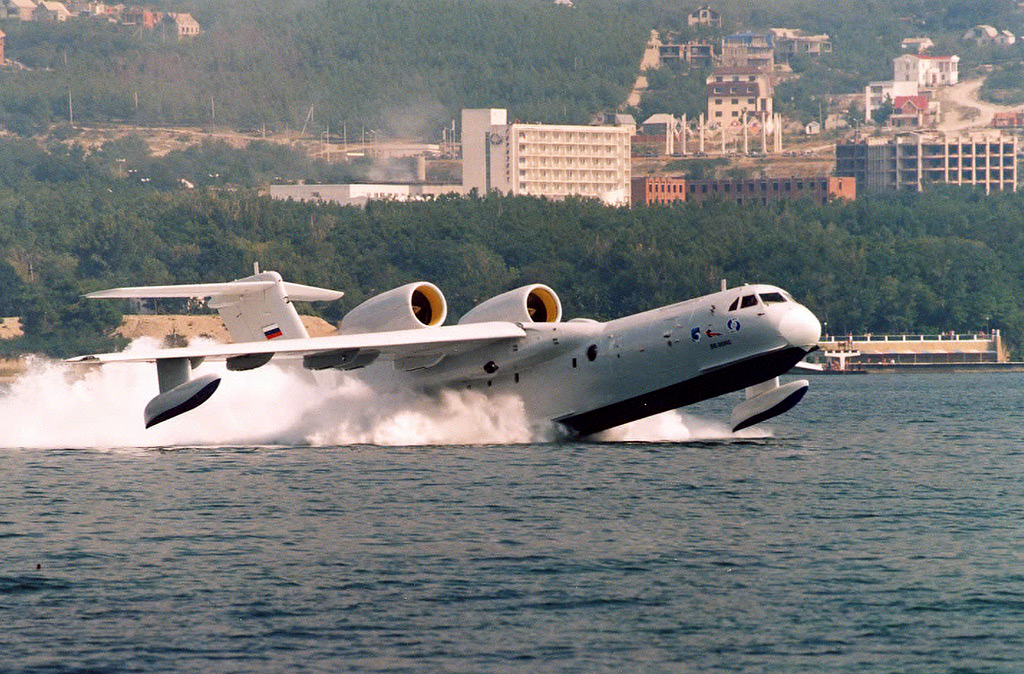 Beriev Be-200 taking off 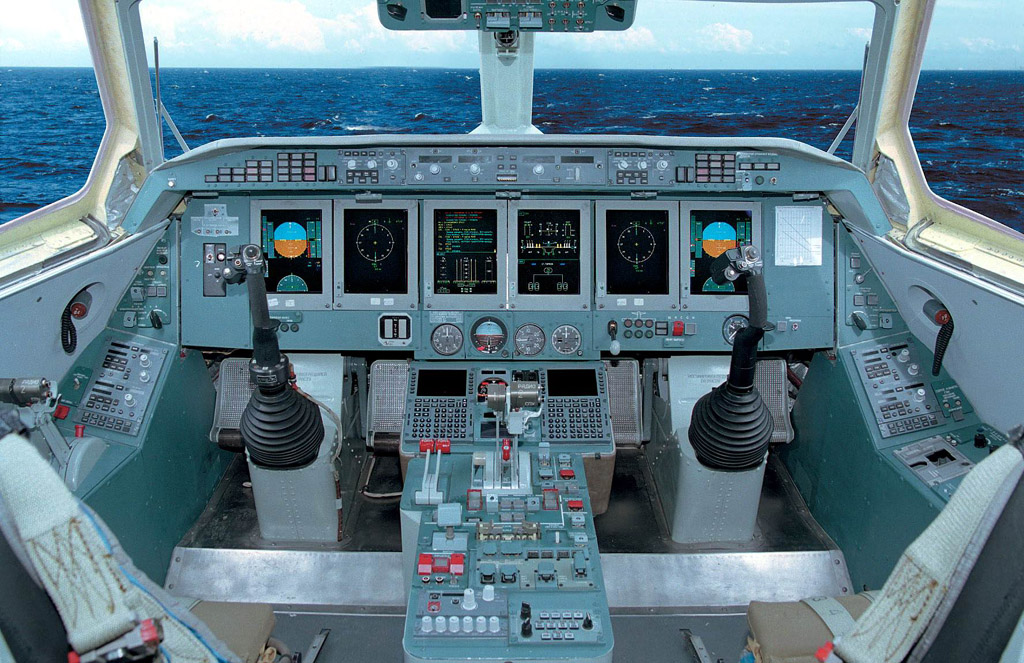 The cockpit of the Beriev Be-200

The Beriev Be-200 Altair is a russian built multipurpose amphibian aircraft. The aircraft was designed by the Beriev Aircraft Company and was built by Irkut. The Beriev Be-200 is intended to serve as a fire fighting, search and rescue, maritime patrol and even passenger transport aircraft. It can carry up to 12 tonnes (12 000 litres, 3 170 gallons) of water or 72 passengers.


The Beriev Be-200 project was started in 1989 with the purpose of building a water bomber for the Russian Government which approved the project on 8 December 1990. The design team was spearheaded by Alexander Yavkin. One year later at the Paris Air Show the project was made public and a model was displayed at the show. The full scale mockup was constructed by Beta Air.

The Beriev Aviation Company was in charge of the design of the Beriev Be-200 together with the Russian Irkutsk Aircraft Production Association, which is currently part of the Irkut Corporation. While Beriev did the development, design and documentation, the testing of the prototypes, the certification and the support of production models the Irkut Corporation was assigned the production preparation, manufacture of tooling, production of the four prototypes and the production aircraft and the spare parts. Currently both companies are part of the state-owned United Aircraft Corporation

According to initial plans the first flight from land of the Be-200 should have occurred in 1997 but due to various delays the maiden flight took place on 24 September 1998. In order to perform a take off from water the aircraft was transferred from Irkuts to Taganrog after it flew an initial 26 and half hours. Shortly after being transferred the Be-200 performed its first take off from water on 10 September 1999 in Taganrog. Three years later on 27 August 2002 the second Be-200 took off and performed its maiden flight. This was a Be-200ES with custom fittings to the specifications of the model's launch customer EMERCOM - the Russian Ministry of Emergency Situations.

The aircraft was presented at several large exhibitions in 2001-2002 in order to demonstrate its capabilities to potential customers. The first such exhibition was the International Maritime and Aerospace Exhibition LIMA'01 in Malaysia and the second was the Korean Aerospace and Defence Exhibition KADE'01 in South Korea (both in 2001). In 2002 the demonstration aircraft flew over 7600 km in Europe and performed 15 demonstration flights in an effort to promote the aircraft to potential customers in France and Greece.

In May 2002 Irkut and EADS signed a memorandum of understanding to carry out a joint market study and to define the conditions and costs of international certification of the Beriev Be-200. The agreement also included plans for worldwide after-sales service. This cooperation between Irkut and EADS resulted in a study that was completed in July 2003 and which concluded that there could be a potential market for about 320 aircraft over the next 20 years.

Irkut and EADS together with Rolls Royce Deutschland planned to obtain Western certification of the Beriev Be-200 and also planned to offer a version with Rolls Royce BR715 engine for these markets. This version received the designation Be-200RR. The plans included converting of the original Be-200 prototype (RF-21511) to a Be-200RR prototype.


The first production aircraft performed its first flight on 17 June 2003 and it was delivered to EMERCOM on 31 July 2003. Out of the seven aircraft ordered by EMERCOM, five have been delivered to the customer in the initial years of production with the remaining aircraft to be delivered by 2008. EMERCOM had also 8 additional options for the aircraft.

The fifth production airframe was used for European certification. This process was expected to be concluded by 2008. However the aircraft was certified by EASA on 7 September 2010.

The Beriev Be-200 is a multirole aircraft. It can be configured either as an amphibious water drop fire-fighting aircraft, either as a freighter or a passenger aircraft with a pressurized cabin and a capacity of 72 passengers.


The aircraft was designed with some unique fire-fighting equipment which allows it to scoop water while skimming the surface at a speed that is roughly 90-95% of the takeoff speed of the aircraft. The development of this system used a modified Be-12P, coded '12 Yellow' which served as a development platform for both the fire-fighting system and the methods of operation. This aircraft which was given the designation Be-12P-200 was later registered as RA-00046.

From 20 August 2004 until 30 September 2004 a Be-200ES was deployed to Sardinia, Italy and it was operated by SOREM, the official operator of fire-fighting equipment for the Italian Civil Defense Department (Protezione Civile). The aircraft was flown by a joint Russian-Italian flight crew and performed more then 100 flights (90 hours flown). This is the first documented operational use of the Beriev Be-200. During the deployment the aircraft extinguished 4 forest fires and dropped more then 324 tons of water.

In August 2016 Portugal requested assistance in helping forest fires. As a result two Beriev Be-200's with crews from the Russian Emergencies Ministry were dispatched to Portugal. During their deployment they prevented fire from spreading in the direction of two settlements - Castro Laboreiro with a population of 1,000 people and Viaden de Baixo.


The first production Beriev Be-200 had its maiden flight on 17 June 2003 and was delivered to EMERCOM on 31 July 2003. A total of seven aircraft have been ordered by EMERCOM.