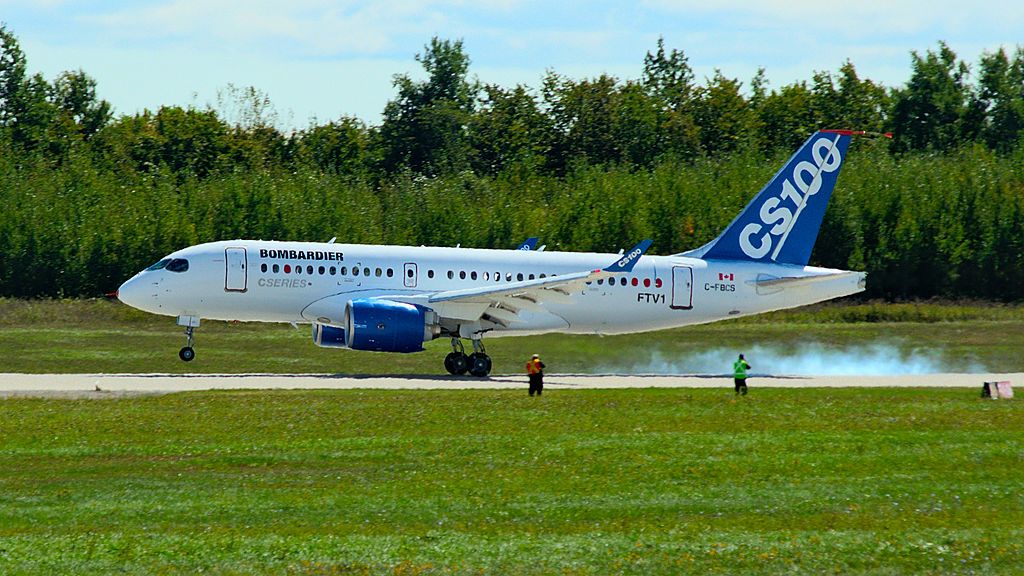 The Bombardier CSeries CS100 lands after completing its maiden flight

The Bombardier CSeries CS100 is a narrow-body twin-engine jet airliner created and manufactured by Canadian manufacturer Bombardier Aerospace. The aircraft is currently in the initial stages of mass production and it is due to enter service with SWISS during the second half of 2016. Initially the CS100 was named C110 but was later renamed to CS100, in the certification documentation is named as Bombardier BD-500 with suffix -1A10.

The CSeries CS100 can seat 110 passengers and it will compete with the Embraer E195-E2. According to the manufacturer it will be able to beat its competitors by at least 10% less fuel consumed per trip.

The first flight test vehicle (FTV-1) completed its maiden flight on 16 September 2013 and was awarded type certification by Transport Canada on 18 December 2015.

In the 1990's Bombardier considered purchasing the dutch aircraft manufacturer Fokker (now defunct) in order to gain access to the Fokker 100 100-seat short-haul aircraft. However the deal couldn't be completed because of "clash of corporate cultures" and the discussion ended in 1996.

Bombardier was also working on another project called "Bombardier BRJX" or "Bombardier Regional Jet Expansion". This would result in an aircraft which is slightly bigger then the Canadair Regional Jet so it would have a wider fuselage that allows a seating configuration of 2-3 instead of 2-2 (from the CRJ) and it would also feature underwing engine pods. This aircraft would be able to seat 80 to 120 passengers. However some time into the project Bombardier decided to stretch the CRJ700 into the CRJ900 and abandon the BRJX project.

In 2002 production of the Embraer E-170 started and it was quickly followed by the 110 seat Embraer E-195 and Bombardier was unable to compete with these as they had no product to match that capacity.


Timeline of orders for Bombardier C-Series