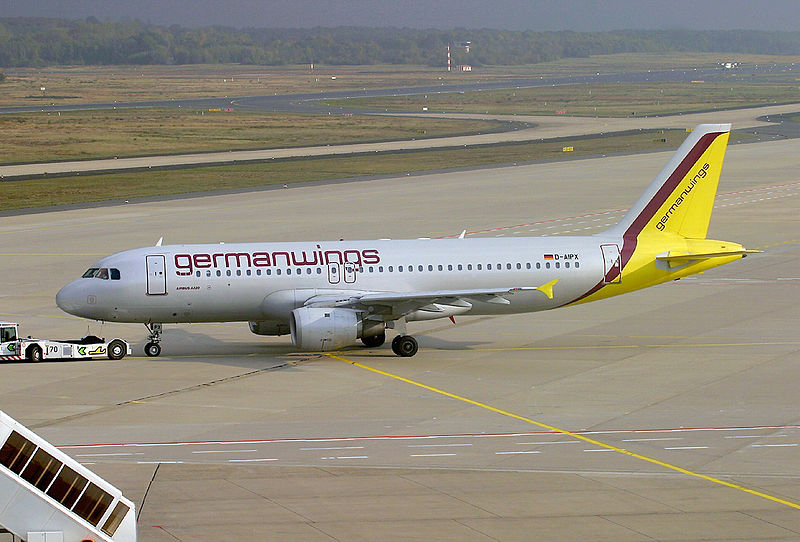 The airplane involved in the accident depicted in October 2003

On the 24th of March 2015, Germanwings Flight 9525 (4U9525) operated by Germanwings with an Airbus A320 registration D-AIPX crashed in the South of France near Prads-Haute-Bléone in the French Alps while en route from Barcelona El Prat Airport to DÃ¼sseldorf Airport. The flight was carrying 144 passengers, two pilots and four cabin crew and it was operating as a scheduled international passenger flight. The crash was the first fatal accident in the 18 year history of Germanwings.

The accident investigation report revealed that the co-pilot of the aircraft, 27 year old Andreas Lubitz intentionally crashed the airplane after locking out the captain from the cockpit. Lubitz had a history of depression and was previously treated for suicidal tendencies. Just weeks before the fatal accident Lubitz was declared "unfit to work" by his doctor. However he kept this information secret and didn't inform his employer. During the flight he locked the pilot out of the cockpit and initiated a descent, flying the aircraft into a mountain.

The accident sparked intense debate about medical evaluations for pilots and the number of required personnel in the cockpit. As a result many local aviation authorities or airlines implemented new regulations that now require the presence of at least two authorized personnel in the cockpit during the entire duration of the flight. This has been followed by an European Aviation Safety Agency temporary recommendation for airlines to ensure the presence of at least two crew members (including a pilot) in the cockpit at all times.


The aircraft involved in the accident was an Airbus A320-200 registered D-AIPX, serial number 147. The plane had its maiden flight on 29 November 1990 and was delivered to Lufthansa in February 1991. It first appeared in the Germanwings fleet in 2003 being later returned to Lufthansa where it served under the name Mannheim. In January 2014 upon the relaunch of Germanwings the plane was sold by Lufthansa to Germanwings.


Germanwings Flight 9525 took off from Barcelona El Prat Airport at 8.55 GMT according to Aena the operator of the airport. It was due to arrive in DÃ¼sseldorf at 11.55 CET.


Initial reports were that the plane reported an emergency just before disappearing from the radar screens. However this was later retracted and it was revealed that the DGAC (French civil aviation authority) declared the plane in distress after the sudden loss of altitude and loss of radio contact.

Available radar data suggests that the aircraft had reached FL380 and then 3 minutes later started descending from FL380 through FL110 in about 8 minutes (with an average rate of descent 3375 fpm). Later the aircraft has appeared to have leveled off at FL068 for one minute while on a northeasterly heading of 26 degrees true. 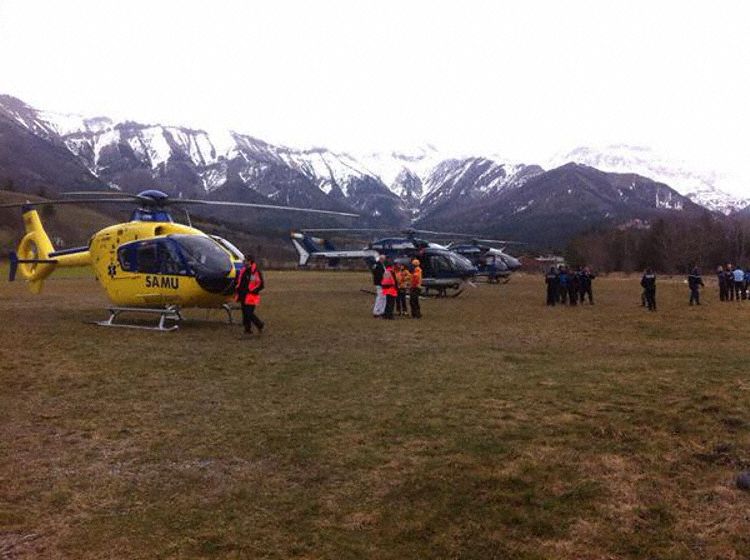 
Immediately after the crash a search and rescue operation was initiated. Two helicopters of the french police have identified the location of the aircraft debris at an altitude of about 2000 m in the mountains near Prads-Haute-Bléone. Initial reports say that there are no survivors so the search will turn into a salvage operation.

Shortly after the accident the French Aviation Authority has set up some temporary flight restrictions in the area surrounding the crash site. The first restriction was set in place on 24 March 2015 at 11:47 GMT and included a circle radius of 3 nautical miles (5.6 km) centered at the crash site. The height of the restriction zone went up to FL140. Later that day at 13:38 GMT a second larger exclusion zone was created. This covered 10 nautical miles (19 km) and went up to FL100. Except government airplanes and rescue helicopters no flight was allowed in that area.

The French Ministry of Interior reported that after about 8 hours the first blackbox has been found and sent to the authorities for analysis.

In the evening of 24 March 2015 the salvage operation was interrupted and was resumed in the following morning. At the location of the crash are expected to arrive Chancellor Angela Merkel of Germany, president Francois Hollande of France and prime minister Mariano Rajoy of Spain.


People on board by nationality

While initially it was believed that most of the passengers are German it was later determined that among other nationalities there were also 45 spanish on board of flight 9525. Germanwings later stated that there were 67 German citizens on board including 16 students from a gymnasium in Haltern am See, North Rhine Westphalia. They were returning from a student exchange with the Giola Institute in Llinars del Valles, Catalonia. They mayor of the city declared that this is the darkest day in the history of the city.

Among notable passengers was Oleg Bryzhak a bass-baritone opera singer and his colleague Maria Radner (contralto) also an opera singer who was travelling together with her husband and infant child.


The crew as composed of 2 pilots and 4 cabin crew. The captain had more then 6000 hours and 10 years of flying experience. He served both with Germanwings and Lufthansa.


Andreas GÃ¼nter Lubitz - the co-pilot who caused the accident - was born on 18 December 1987. He grew up in Neuburg an der Donau, Bavaria and Montabaur, Rhineland-Palatinate. He was interested in flying and took flying lessons at a local aviation club in Montabaur called Luftsportclub Westerwald.

After he finished high school he was accepted into a Lufthansa trainee programme. Starting with 2008, he attended a pilot training course at the Lufthansa Flight Training school in Bremen, Germany and at the Lufthansa Airline Training Center in Goodyear, Arizona, United States.

During this training Lubitz took time off for several months and also informed the Flight Training Pilot School in 2009 of an episode of severe depression that he experienced. However he managed to complete his training at worked for eleven months as a flight attendant for Lufthansa before he received his commercial pilot license.

French President François Hollande publicly issued a statement saying: "The conditions of the accident, which have not yet been clarified, lead us to think there are no survivors." He then called the crash a tragedy and called for solidarity. The Prime Minister of France Manuel Valls said that he had dispatched the Interior Minister Bernard Cazeneuve to the accident scene and set-up a ministerial crisis cell to co-ordinate the incident. President Hollande also said that he would be speaking with Chancellor of Germany Angela Merkel.

King Felipe VI of Spain, who was at the time of the accident flying to Paris for a state visit to France, announced he will be cancelling the visit and return to Spain. "Following conversations with President Hollande and Mariano Rajoy we have taken the decision to postpone our official visit to France and try and carry it out in the future," he said.

German Chancellor Angela Merkel announced that she will travel the crash site on 25 March 2015 (the day following the accident). The Chancellor said that the incident had plunged Germany, France and Spain into "deep mourning".

Initially the germanwings.com website was unreachable due to the high amount of traffic. Later a message appeared stating that they cannot yet confirm media reports but are looking into the issue. By early afternoon it become evident that the plane has been lost. Lufthansa CEO Carsten Spohr was the first to acknowledge the crash and declare that this is a sad day for the whole Lufthansa Group. Later Germanwings officials held a press conference in which they confirmed the loss of the aircraft and provided important information like: 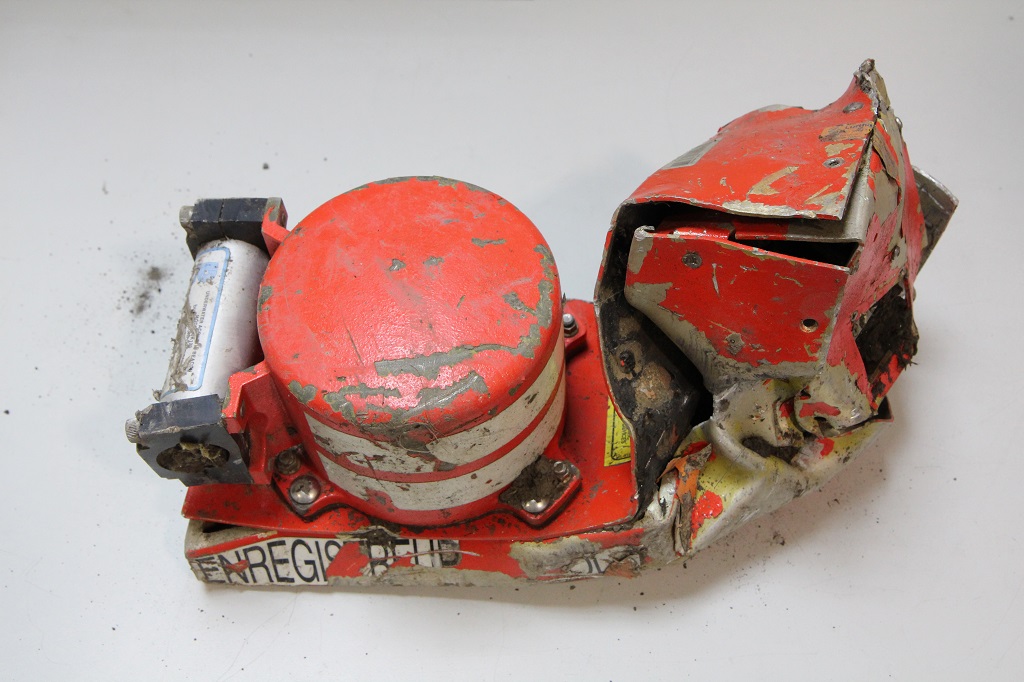 Photo of the CVR brought to the BEA on the morning of the 25 March Source: Bureau d'EnquÃªtes et d'Analyses (BEA, France, www.bea.aero)


The investigation is being conducted by Bureau d'EnquÃªtes et d'Analyses pour la Sécurité de l'Aviation Civile (BEA), the french authority responsible for the investigating of aviation accidents in France. They have dispatched a team of investigators which are being joined by representatives of the aircraft manufacturer Airbus, the engine manufacturer CFM International and a team from the German counterpart of BEA the Federal Bureau of Aircraft Accidents Investigation (BFU).

On 25 March 2015 the BEA released photographs with the damaged cockpit voice recorder (pictured right). The damage is significant but the BEA is confident that the information can be read out from the device.


On the 13 March 2016 the french BEA released the final report concluding that the cause of the crash was:


''The collision with the ground was due to the deliberate and planned action of the co-pilot who decided to commit suicide while alone in the cockpit. The process for medical certification of pilots, in particular self-reporting in case of decrease in medical fitness between two periodic medical evaluations, did not succeed in preventing the co-pilot, who was experiencing mental disorder with psychotic symptoms, from exercising the privilege of his licence.

The following factors may have contributed to the failure of this principle:

- the co-pilotâ€™s probable fear of losing his ability to fly as a professional pilot if he had reported his decrease in medical fitness to an AME;
- the potential financial consequences generated by the lack of specific insurance covering the risks of loss of income in case of unfitness to fly;
- the lack of clear guidelines in German regulations on when a threat to public safety outweighs the requirements of medical confidentiality.''

On the day following the accident, Germanwings retired the flight number 4U9525, replacing it with 4U9441. The change affected also the outbound flight number which changed from 4U9524 to 4U9440. These changes affected only the morning flight to Barcelona, the afternoon flight numbers (which were different) remained unchanged.